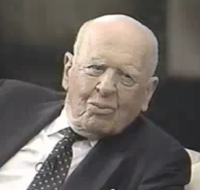 Any man who follows solar eclipses around the world and was active on Wall Street for seventy years, should have a perspective on the market and life that is worth considering. This article presents selected quotes from Philip Carret on a variety of subjects.

Business Practices
“Let it be remembered that the accumulation of capital is hard work. It is worth burning a little midnight oil to study how best to keep it.” (1963)

Education
“Habits, good or bad, acquire an iron grip on human beings. All that the young need to do be assured of a good life is to surrender themselves to good habits, and flee from the bad ones. Easier said than done, of course.” (1963)

“Command of the English language more often than not often decides who succeeds among people of otherwise equal talents.” (1991)

“Failure can be a great educational experience.” (1991)

“The investor with a diversified portfolio should reexamine it at least once or twice a year, asking himself as to each item, “If I didn’t already own XYZ, would I buy it at the current market price?” If the answer is a resounding “NO!” perhaps it should be sold.” (1963)

“Most useful and most dangerous are the stock market averages, most useful in revealing the general trend of the market, most dangerous if they mislead the trader into forgetting that after all his profits depend on the movements of the individual stocks in which he deals.” (1930)

“Conceiving the speculator as manager of a business it will be seen that he also controls men, materials and money. The money is the starting point of his business, the materials are the securities which he buys and sells, the men are the directors and manager of the companies in whose securities he invests.” (1930)

“A corporation is a human creation and has many human attributes. Its life may be long or short, prosperous or the reverse. Sooner or later, in all probability it must die. The end of it existence may be sudden, the result of some hidden weakness, but in the vast majority of cases a corporation give ample evidence of financial ill-health before its dissolution or-to carry the metaphor further-a major operation occurs.” (1924)

“To consider stocks by groups rather than by individual companies is further to ignore the vital factor of management.” (1930)

“The investor, or investment advisor, who so lacks confidence in his own judgment that he won’t buy any security until it is favored by the consensus of the investment community, will buy few bargains and is unlikely to achieve results to which he could point with pride.” (1969)

“Everyone has an occasional bad day and it is utterly unreasonable to expect any company to chalk up new records quarter after quarter.” (1972)

“Income producing real estate is fundamentally the best kind of security for a loan. Real estate is the only essential to every human activity.” (1924)

“Foreign government bonds are all alike in one respect. Whether the borrowing government be Ecuador or Great Britain the lender, or bondholder, enjoys no real security except the good faith of the borrower.” (1924)

“A safe bond is merely on that is certain to be paid when due. The actual price at which it may sell at a given time, taken by itself, is no indication of safety. The price of a safe bond may fluctuate very widely.” (1924)

Phil Carret exercised safety-based commandments. And, the last one appears to be targeted towards “intelligent speculation.” There, he advised setting aside a proportion of available funds for long-term options on stocks in promising companies whenever available. With careful study and patience, Carret knew he could predict good outcomes. Philip Carret died on May 28, 1998, at age 101 at his home in Scarsdale, New York.

Philip Lord Carret was born on November 29, 1896 in Lynn, Massachusetts. His parents were a 51-year-old lawyer and a 39-year-old a social worker. He was their only child. His family was well off and like others in his family he attended Harvard. The family’s earliest Harvard man was the Rev. Daniel Gookin, Class of 1669. As a 1914 freshman, he was at the new Yale Bowl for the first Harvard- Yale contest.

In 1917 Carret joined the Army Signal Corps (the predecessor to the Air Force) to fight in WW1. He was trained to fly the Sopwith Camel and was dispatched to France but saw no action because the war ended.

Once discharged and armed with a degree in Chemistry, Carret visited a grimy gas company laboratory where he noticed his tour guide wore a celluloid collar (the equivalent of today’s clip-on tie). He declared the industry “déclassé” and called it, “The absolute nadir of sartorial elegance.”

He began working for a small BostonSecurities firm at $15/week. Five months later, his salary went to $20/week. “I was insulted at the paltry amount,” he said and took off to tour America, finding work at mining camps. Later, he landed a job selling bonds in Seattle.

While in Seattle, in 1920, he met Florence Elisabeth Osgood, the granddaughter of a Civil War General and a Vermont Governor. She was a 1918 graduate of Wellesley College. They were married in 1922 and remained so for 63 years, until she passed away in 1986. They had two sons and a daughter.

Dr. Carret liked to say that Betty was 99.99 percent perfect because only God is 100 percent. He added, “In truth, I never detected a flaw that could represent a 0.01 shortfall.”

Following his marriage, he and Betty returned to Boston and he rejoined his previous firm, this time in sales. After four months, he quit and went to work at Barron’s, the new financial weekly owned by Clarence W. Barron. Carret worked as a financial reporter and wrote feature articles. He loved to tell stories about his flamboyant boss (Barron), who weighed in excess of 300 lbs. and had a flowing white beard.

In 1928, Carret scraped together $25,000 from family and friends and decided to start his own mutual fund named Fidelity Investment Trust. It was later renamed Pioneer Fund.

He fund began strongly with blue chip stocks like Maytag preferred and Firestone Tire and Rubber. Even after the 1929 crash, his fund was still ahead by 11 percent. However, by the beginning of 1932, an original investment of $1,000 on January 1, 1929 would have shrunk to $470.

Following the market bottom, later in 1932, the fund bounced back to being up 37 percent. Today, the original $1,000 investment would be worth more than $2 million, making Pioneer (according to Mutual Funds Magazine) by far the most profitable of the old-time funds.

Carret selected stocks for himself, for Pioneer and later for Carret & Company, which he launched in 1963 (the same year he sold control of Pioneer’s management company). Twenty years later, he stepped down as chairman of Pioneer.

Warren Buffett said that Carret had “the best long term investment record of anyone I know.” He is most famous for the long successful track record he achieved investing in common stocks and for being one of Warren Buffett’s role models.
Carret’s nuts-and-bolts style of investing became known as “value investing.” He wanted to make sure his wealthy clients’ investments would continue to grow.

One of Phil and Betty’s hobbies was following solar eclipses. Mr. Carret and his wife saw their first one in Westerly, RI in 1925. Since then, they traveled to every corner of the world, from the Amazon to Antarctica to Siberia and Borneo and saw 20 eclipses. He says that they are all pretty much the same but insists that to him, no sight compares with the inevitable march of the moon across the sun.

During his lifetime, Carret made many donations to Harvard, Wellesley and several charities.