Edson Gould was born in 1902 in Newark; he died 1985 in West Reading PA.
After he graduated from Lehigh University in 1922, he started to work on Wall Street for Moody’s and spent most of his life researching. Initially, he wanted to be an engineer but he became obsessed with finding the one factor beyond economic and monetary conditions that sparked the market.
Edson’s journey leads to forecasts that were so frequently correct that the mere rumor of a change of would cause discernible market reactions. Everybody wanted to know what Gould had to say, but nobody wanted to believe or study his underlying reasons for his forecasts. When he died in 1985, history soon forgot him and his techniques. A quiet and simple man with reasonable simple methods (less profitable for academics and Wall Street) can easily be left to the pages of history.

Gould has been called the dean of technical analysis and the most accurate forecaster ever but he, and his methods, have gone by the wayside–just like the concepts of Charles Dow and his Theory.
Gould’s “Senti-meter,” calculated on the Dow Industrials dividends, and Dow’s concepts and theory, create a great set of indicators for and investor to use for a successful investment program.
Gould was the first to suggest that fundamentals and monetary conditions alone couldn’t explain stock market behavior. Edson read the book “The Crowd” by Gustave Le Bon (see page 4) and after re-reading it he “came to the realization that the action of the stock market is nothing more nor less than a manifestation of mass crowd psychology in action.”
Edson’s designed t h e Senti-meter to measure crowd psychology (see below) the indicator shows how much investors are willing to spend for $1.00 of dividends. Kenneth Fisher has called the Price/ Dividend Ratio “the single most powerful indicator of long term stock direction I’ve seen. It’s so simple, but inexplicably powerful.”

The Utility Barometer
In an 1974 article, Edson Gould wrote that he thought utilities were an early stock market indicator and that they peaked and bottomed before the other indices by a few months. Gould noted times when the utilities did lead the market down and up by a few weeks or more.

The “Gould Standard”
An investor should consider sound companies with consistently strong earnings — aka the “Gould Standard.” Avoid poorly managed companies, which regularly miss Wall Street expectations, they are hunks of lead. Gould said to focus your holdings on proven winners – companies in which investor psychology will always tip back in your favor. That is one of the best ways to remove uncertainty and emotion from your portfolio.

Three Steps and Stumble
Edson Gould knew that prices rose when monetary policy was loose and money was flowing. Prices fell when money was tight. His measure for monetary policy was based on the Fed raising or lowering interest rates.
Edson said when the Fed raised interest rates 3x it would show their intent to slow the economy. When the Fed lowered rates three times it would show the intent to grow the economy.
Since 2000, Gould’s interest rate indicator hasn’t worked well. The Fed has been keeping rates low for years and money has been flooding the economy.
Gould was right in thinking monetary policy is an important influence on investor psychology and stock prices.
Edson’s original interest rate indicator could be changed to any three actions the Federal Reserve does to show its intent: it wants to expand or slow the economy or replace rates. You don’t want to fight the Fed. 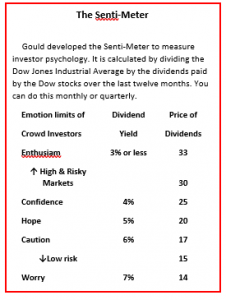