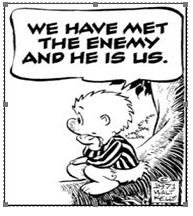 “… Here was the essential ingredient, the missing link, for which I had been searching. An apparently irrational stock market became comprehensible. Order emerged from chaos. Effect was finally linked to cause. I came to the initial realization, since reinforced, that the action of the stock market is nothing more than a manifestation of mass crowd psychology in action.

According to LeBon, “In its ordinary sense the word ‘crowd’ means a gathering of individuals of what-ever nationality, profession or sex, and the chances that brought them together. From a psychological point of view the term ‘crowd’ takes on a different significance. Under certain given circumstances, and only under those circumstances, a group of men presents new characteristics very different from those of each individual. The sentiments and ideas of people in the group take the same direction and their own personality vanishes. A collective mind is formed, doubtless transitory, and presents very clearly defined characteristics. The group has now become (in the absence of a better term), an organized crowd, or, if preferable, a psychological crowd. It forms a single being, and is subjected to the law of the mental unity of crowds.”

“The most striking peculiarity presented by a psychological crowd is the following: Whoever the individuals are that compose it (regardless of lifestyle, occupation, character, or their intelligence) the fact that they have been transformed into a group puts them in possession of a sort of collective mind which makes them feel, think, and act in a manner quite different from that in which each individual of them would feel, think and act were he in a state of isolation.”

The psychological crowd” has temporary heterogeneous elements, which for a moment are combined….
The fact that crowds possess common ordinary qualities explains why they can never accomplish acts demanding a high degree of intelligence. In crowds, it is stupidity and not mother-wit that is accumulated.

Presumably LeBon knew nothing about the stock market, and probably could not have cared less. But it so happened that shortly after I “discovered” LeBon, an edition of Charles Mackay’s “Extraordinary Popular Delusions and the Madness Crowds” (originally published in 1841) appeared with a forward by Bernard M. Baruch, who said:
All economic movements, by their very nature,
are motivated by crowd psychology. Graph and
business ratio are, of course, indispensable in
our groping efforts to find dependable rules to
guide us in our present world of alarms. Yet I
never see a brilliant economic thesis expounding,
as though they were geometrical theorems, the
mathematics of price movements, that I do not
recall Schiller’s dictum: ‘Anyone taken as an
individual, is tolerably sensible and reasonable
— as a member of a crowd, he at once becomes
a blockhead. Without due recognition of crowd-
thinking (which often seems crowd-madness)
our theories of economics leave much to be
desired.”

“I have always thought that if, in the lamentable era of the ‘New Economics,’ culminating in 1929, even in the very presence of dizzily spiraling prices, we had all
continuously repeated, “two and two still make four,” much of the evil might have been averted. Similarly, even in the general moment of gloom in which this
forward is written, when many begin to wonder if declines will never halt, the appropriate abracadabra may be: “They always did.” This had to be it. The stock market was essentially nothing more than a manifestation of mass or crowd psychology in action. This contention is one I have repeated time and again, in my writing and speeches. In short, the stock market reflects the changing moods, emotions and feelings of the mass of investors.

As such it leads a life of its own, albeit a vicarious life, which mirrors and reflects the changing sentiments of the crowd of investors.

A crowd, as I define it, is any group with a common purpose or interest. The intelligence of the crowd is not the average intelligence of the individuals. The individual sinks to the level of the crowd, which is quite separate from, and below the intelligence of the individuals.
Crowds do not think. The do not reason. They simply react emotionally. As a near-perfect example of what I mean, and something to which almost anyone can relate, the following example is cited: You’re alone in an empty movie theater and hear the cry of “fire.” You look around, see no flames, smell no smoke. You calmly walk to the nearest exit. Repeat the same cry of “fire” (again without flames visible or the smell of smoke) in a crowded theater and once the crowd starts running for an exit, you’ll find yourself running too. That’s crowd psychology.

All subsequent experience has confirmed that the stock market is essentially a manifestation of crowd psychology in action— the result of the changing moods, feelings, sentiments and emotions of the “crowd” of investors. So, I concluded the stock market is essentially the result of three sets of factors that may be grouped under the headings: economic, monetary and psychological, the latter relating to crowd psychology.”