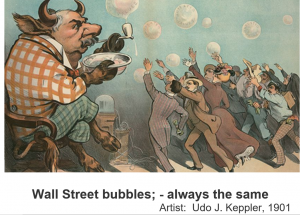 This illustration shows a bull market blowing bubbles labeled, “Inflated Values,” with many unwary investors reaching for them.

“A bubble is where investors buy an asset, not for its fundamental value, but because they plan to resell, at a higher price, to the next investor.”

Wall Street bubbles of over evaluation occur every few years for the same reason; people get greedy.

There is a list of reasons people get greedy and cause the bubbles.

We see an excessive amount of enthusiasm of big bubbles occurring after there has been great economic growth (railroads in the 1870s, cars and electricity in the 1920s and since 2000, internet/ technology). Bubbles create extreme amounts of enthusiasm, debt, corruption, hope, and speculation.

This story presents highlights of bubbles in human nature and the reasons for their cause.

Stages of an Economic Bubble

According to the economist Charles P. Kindleberger, the basic structure of a speculative bubble can be divided into 5 phases:

GREATER FOOL THEORY states that bubbles are driven by the behavior of perennially optimistic market participants (the fools) who buy overvalued assets in anticipation of selling it to speculators (the greater fools) at a much higher price.

EXTRAPOLATION is projecting historical data into the future; if prices have risen at a certain rate in the past, they will continue to rise at that rate forever. The argument is that investors tend to extrapolate past extraordinary returns on investment of certain assets into the future, causing them to overbid those risky assets in order to attempt to continue to capture those same rates of return.

Another related explanation used in behavioral finance lies in herd behavior: investors tend to buy or sell in the direction of the market trend. This is sometimes helped by technical analysis that tries to precisely detect those trends and follow them, which creates a self-fulfilling prophecy.

Economic or asset price bubbles are often characterized by one or more of the following reasons:

● High debe use (leverage) to purchase assets, such as purchasing stocks on margin or homes with a lower down payment. Higher risk lending and borrowing behavior, such as originating loans to borrowers with lower credit quality scores (e.g., subprime borrowers), combined with adjustable rate mortgages and “interest only” loans.

● Rationalizing borrowing, lending and purchase decisions based on expected future price increases rather than the ability of the borrower to repay.

● Rationalizing asset prices by thinking “this time it’s different” or “housing prices only go up.”

● A large amount of marketing or media coverage related to an asset class.

● International trade (current account) imbalances, resulting in an excess of savings over investments, increasing the volatility of capital flow among countries. For example, the flow of savings from Asia to the U.S. was one of the drivers of the 2000s housing bubble.

● A lower interest rate environment, which encourages lending and borrowing.

The stealth phase is the very early days of an asset when only a relatively few people are aware of it and can see the value… They are the true believers.

Now big money comes calling. Institutional investors take an interest. There is some selloff during the awareness phase by the initial true believers but not enough for anyone to notice. …

The media notices what is going on and broadcasts it everywhere. Average investors catch wind that something big is happening and they want in. The price starts to rise, and inexperienced investors think it will keep going up forever.

The blowoff phase is the bubble part. The selloff accelerates driven by fear. The fire sale plunges the price of the asset. There are now no greater fools. …”