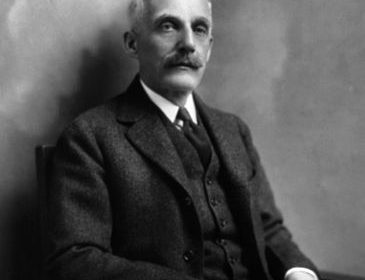 Andrew Mellon is known as a financier, industrialist, art collector and philanthropist. While many of his peers built their careers from the ground up, Andrew was born into a wealthy family. His father, Thomas, who created the first “Mellon” bank, brought Andrew into the banking business and positioned Andrew’ for a successful life and career. Before we learn about Andrew, let us look at Andrew father, who launched the family banking business.

Thomas Mellon
Thomas Mellon wrote in his autobiography that at the age of ten, he had been struck by the “wealth and magnificence I had before no conception of” after he saw the mansion of prominent landowners Jacob Negley and Barbara Ann Negley. (Thomas later married their daughter). At fourteen, Thomas read The Autobiography of Benjamin Franklin and became inspired by Franklin’s rags-to-riches tale. He sidestepped his family’s farming business and in October 1834, he enrolled at the Western University of Pennsylvania (now the University of Pittsburgh), where he studied law and banking.

After his 1837 college graduation, Thomas built a successful legal career in Pittsburgh. In 1859, he was elected assistant judge of the Allegheny County Court of Common Pleas. For the next ten years, he served as a judge. Thomas shrewdly invested income from his legal practice by buying up large portions of downtown Pittsburgh real estate. In late 1869, he retired from the bench and opened a banking house.

T. Mellon & Sons’ Bank
On January 2, 1870, Thomas opened T. Mellon & Sons’ Bank. Above the cast iron door of the original bank, Thomas placed a nearly life-sized statue of Benjamin Franklin, his personal inspiration. The Panic of 1873, led to the failure of half of Pittsburgh’s ninety organized banks and twelve private banks, but Mellon & Sons survived the depression and was well-positioned to prosper when the economy recovered. Mellon’s shrewd investments included real estate holdings in downtown Pittsburgh, coalfields, and a $10,000 ($180k in today’s money) loan in 1871 to Henry Clay Frick (which provided coke for Andrew Carnegie’s steel mills).
On January 5, 1882, Thomas retired from day-to-day management of the bank’s affairs and handed them over to his 26-year old son, Andrew, who emerged as the sole interest in the bank. By the end of the 19th century, Mellon Bank was the largest banking institution in the country outside of New York. Thomas divested himself of most of his remaining property on February 3, 1890, leaving it in the hands of his sons. By 1902, Andrew was president of what had become the Mellon National Bank.
Thomas died on his 95th birthday, February 3, 1908. By that time, the Mellon family ranked among the wealthiest and most prominent industrialists in the United States.

Andrew Mellon
Born in Pittsburgh on March 24, 1855, Andrew Mellon was the sixth of eight children of Thomas and Sarah Mellon. The children grew up in a wealthy household but life was not all ribbons and candy. Only five of the eight children lived to become adults. Andrew attended the University of Pennsylvania but left school before he graduated.File:AWMellon.jpg

Thomas encouraged his sons to become entrepreneurs and groomed them to take over his business ventures. At just 21, his sons Tom and Jim had raised $100,000 ($202B in today’s money) operating a nursery, lumberyard and construction supply business.
At 17, Andrew was busy managing a theatre. In 1872, Thomas put Andrew in charge of a struggling lumber and coal business; it soon turned into a profitable enterprise.

Andrew joined his father’s banking firm, T. Mellon & Sons, in 1880 and two years later Thomas transferred ownership of the bank to him. In 1889, Mellon helped organize the Union Trust Company and Union Savings Bank of Pittsburgh. Andrew branched into industrial activities including oil, steel, shipbuilding, and construction.
His financial backing helped create several giant enterprises including aluminum, industrial abrasives (“carborundum”), and coke. Mellon also financed Charles Martin Hall, whose refinery grew into the Aluminum Company of America (Alcoa).
A long line of diversified interests began in 1889 with the founding of the Union Trust Company of Pittsburgh and a later subsidiary, the Union Savings Bank.

Their marriage ended in a bitter divorce in 1912, which was granted on grounds of Nora Mellon’s desertion and her adultery with Capt. George Alfred Curphey, an English soldier, and other men. Mellon did not remarry. In 1923, his former wife married Harvey Arthur Lee, a British-born antiques dealer 14 years her junior. Two years after the Lees’ divorce in 1928, Nora Lee resumed the surname Mellon, at the request of her son, Paul.

President Harding and Secretary Mellon were on the same page when it came to taxes. Harding called for a revision of the tax system, readjustment of war taxes and the creation of a federal budget system. Mellon not only supported Harding’s programs, but also had the financial background to implement them. His goal was to reduce government debt that resulted from World War I.

The 1926 Mellon-Berenger Agreement established the amount of France’s debt to the US and a repayment schedule. The agreement reduced the amount of funds owed but it established an amount that the French would be able to pay. Mellon was also a key negotiator for Germany’s war debt. He successfully drew the debt down from $25M to $16M.

During his tenure, Mellon was not happy with the manner in which the government’s budget was maintained, rising expenses and the failure of income or revenues to keep up with increased expenses. The fact that the government was not setting aside any savings also grated on his nerves.

In 1932, Andrew Mellon resigned as Secretary of the Treasury to accept the ambassadorship to the Court of St. James in London.

Philanthropy
Andrew devoted much time and considerable sums of money to philanthropic causes. In 1913, Andrew and Robert honored their father through the creation of the Mellon Institute of Industrial Research, an organization designed to forge a partnership between American scientific research and industry. In 1937, Andrew Mellon left a combined gift of $25 million to the people of the United States, part through the donation of his extensive art collection and the remainder in cash for the construction of what became the National Gallery of Art in Washington, D.C.